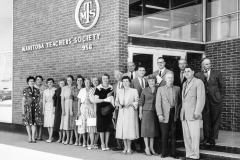 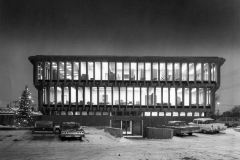 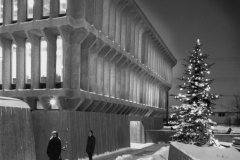 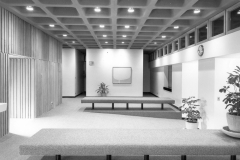 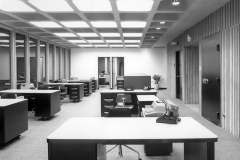 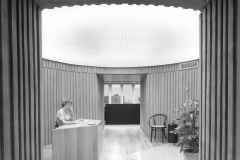 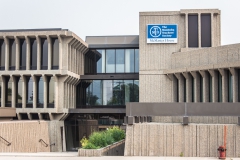 The Home of Manitoba’s Teachers

For over two generations, Manitoba teachers have gathered at McMaster House but many have never realized that the impressive building at the corner of Harcourt and Portage Avenue is not the first to bear the name of the society’s second General Secretary, Thomas McMaster. It is in fact, far from being the first home of the MTS.

Having survived and thrived past the vital first year, The Manitoba Teachers’ Federation established a central office in the McIntyre Block, 416 Main Street in January 1921.  At the heart of downtown Winnipeg, itself a still-developing hub of trade and commerce, the McIntyre Block was considered a prestigious address with seven stories (2 more added to the original 5 in 1908) of elegant brick archways and a stately interior with marble stairs and dark oak doors and mouldings.

The Federation rented a modest space for $25 per month on the 7th floor. In 1924 the need for more space had them move to the 4th floor when there were two employees; General Secretary E.K. Marshall and a part-time stenographer, Josephine Rosebush. They moved again to the 6th floor in 1931 as more staff came on board. With the depression arriving shortly afterwards, it isn’t hard to imagine the misgivings of having just expanded and very likely signed on for an increase in rent even as they reduced membership fees for cash-strapped teachers.  And yet over the next twenty years they weathered many changes and not a few significant advances.

In 1951 the MTS moved out of the building that had been its’ base of operations for over 30 years and into offices on the 8th floor of the Paris Building to accommodate a full-time staff of six.  That office space at 259 Portage Avenue is not only still in use today, but is a designated historic site. Unfortunately, the McIntyre Block met with an ignoble end in 1979 when, neglected and run-down, it was demolished by its owners and resurfaced as a parking lot.

The Paris Building had enough space for the basic office work of the society but it was hardly ideal: the rent was expensive and likely to keep rising past the point of affordability, there wasn’t enough space for the growing variety of workshops and meetings the society hosted and when such events were held parking for members was difficult even then. At the 1953 AGM a resolution was passed to strike up a committee that would prepare a proposal for the MTS to purchase land and construct its own building. Aside from purely pragmatic considerations, the committee suggested that a building bearing the MTS name would keep our presence in the public eye. Besides, other teachers’ organizations in neighboring provinces had done it. It was time Manitoba established its own permanent address too.

Initially, the plan was to build a two-storey office which the MTS would finance through the rental income the extra space would generate, but this turned out to be problematic. “The combination of high property costs, difficulty of making rental arrangements, and very bad traffic conditions in the downtown area have convinced the Building Committee that this plan is not feasible.” Manitoba Teacher – March / April 1956.

The alternative was to buy a lot at the corner of Lipton Street and Portage Avenue and build according to the Society’s needs now and into the future. It was purchased at $300 a front foot at the time and is now known as the home of DeLuca’s.

Since quite a few members had already asked about being able to invest in the venture, the committee ran with the idea. Rather than borrowing the money, they asked members if they were prepared to invest not only in the building, but essentially their own organization through a series of bonds secured by the assets of the Society. The answer was a resounding “Yes!”

The architectural firm of Libling, Mitchener and Diamond were chosen to bring the MTS vision to life and in June of 1956 the committee celebrated with the official sod turning.

The hole became a foundation, then for months visiting teachers – “sidewalk superintendents” – watched as something materialized from nothing – just as the MTS had done. And at last, in December, there was only one question: “When shall we have the big official opening?” And then came tragedy. … On December 10, 1956, Tom McMaster died. For many years, as he well knew, he had walked in the shadow of death, though few others knew. And later the same month, as if to emphasize that the old order was indeed changing, death came to E. K. Marshall.  “ Chalk, Sweat and Cheers”

The task of arranging the final details of the building in preparation for the grand opening must have weighed greatly on the committee as well as the whole of the MTS family in such a time of grief, but there couldn’t have been a more fitting tribute to Tom McMaster who had been a driving force for the project. Only 38 years to the day on April 22, 1957 the MTS went from its first meeting to welcoming teachers to a place it could truly call home.

For all of the planning it soon became obvious that the rate of growth of the society surpassed all expectations. Only 5 years later, talk of expanding the present building began in earnest and by 1964, resolutions at the AGM provided for committees to begin hashing out new building plans.

In two areas the MTS purposely chose to repeat history; awarding the contract to Libling, Michener and Associates and in choosing to finance the new project by selling bonds to members.  Again, sale of the bonds (at 6%) proved so popular the first series had to be limited to so much per member so that everyone stood a chance of getting in on the investment.

This time around the committee chose a location for a new building which would easily accommodate an addition to the original not so much “if, but when” the time came.  Despite construction difficulties which delayed the final stages of building for a whole year, when this new incarnation of McMaster House opened its’ door on September 23, 1967, the end result was worth the wait.

At the unveiling of the new facility, Dr. Johnson, Minister of Education stated: “What a striking building it is! From the outside it has the lines of a fortress. And a fortress it should be—to guard the Society’s high level of professional competence.”  www.winnipegarchitecture.ca

McMaster House was the winner of the 1968 Manitoba Association of Architects annual award and is included on the current Winnipeg Architecture Foundation website as a local example of Brutalist architecture. “Among its Brutalist characteristics are the ample use of bare concrete, here treated to reveal its aggregate components. This concrete can be found in the ground floor patterned cladded of the 350-seat auditorium, the waffle ceiling and in the sturdy mullions ( vertical bars between window panes) of the upper floors. These mullions, or fins, also recall the widespread Modernist use of Le Corbusier’s vertical brise soleil. Another notable Brutalist element is the “inverted ziggurat” treatment of plan and elevation in which each floor projects out over the one below.”

As it turned out, the building committee was right in planning for growth but it would take much longer for the next round of renovations.  Ten years after completion, the first expansion feasibility study was conducted, but AGM delegates defeated the resolution to add two more floors to McMaster House in 1978. In 1983, renovations resulted in more footage devoted to offices but at the expense of meeting space.  Finally, with strong recommendations that the present space was hampering operations and impacting delivery of services, a second study was conducted starting in 1987.

After considerable deliberations, they chose the option of expanding not upwards but outwards to the adjacent lot, adding 17, 597 sq ft not counting the improved garage parking. Construction began in 1991 and on Friday, October 23, 1992, McMaster House with its impressive new wing was officially opened with many friends, old and new, come to toast the latest symbol of growth and more great things to come for the Manitoba Teachers’ Society.